Wyverns are similar to dragons, and have only two legs. 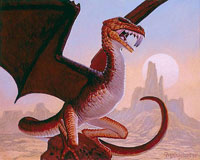 he wyvern is a creature of legend, and a cousin to the dragon. Wyverns are winged, serpent-like creatures. Unlike dragons, wyverns have only two legs, a barbed tail, and cannot breathe fire. Wyverns are smaller than dragons.

The wyvern appears in some western folklore as a malign and violent predator with a fierce head, bat wings, and a tail. It is said to breathe poison. Other accounts tell that the wyvern's most deadly weapon is its poisonous tail stinger. The wyvern has the head of a serpent and the talons of an eagle.

Although they have the strength and ferocity of dragons, wyverns lack the grace and intelligence which are innate to dragons. Wyverns typically prey on deer, goats, and other such creatures. Unlike dragons, which can be sometimes good and sometimes evil, the wyvern is unambiguously malicious.

Wyverns are found often in heraldry. The wyvern represents war, envy, and pestilence, and is a sign of strength to those who bear it.

The origin of the word wyvern comes from thirteenth-century word wyver, which in turn is derived from the French wyvere, which means both "viper" and "life."

The wyvern is also similar to the basilisk and the cockatrice.