D&D Miniatures can be played in a tactical game, or as ready-to-use RPG figurines. 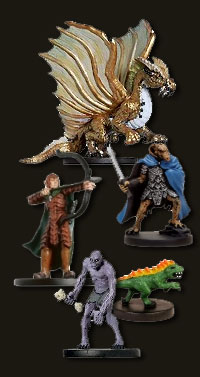 tribute to its roots in miniatures wargaming, D&D Miniatures is a collectible tactics game played with miniature figurines from Dungeons & Dragons. It was first released in 2003.

The game is played with a few different components: the miniatures themselves, stat cards, a battle grid, damage counters, and a 20-sided die. The miniatures represent heroes, villans, and all kinds of monsters. The stat cards are two-sided. On one side, the rule information is printed—this includes a creature's strengths, weaknesses, and special abilities. On the other side is a description of the creature so you can imagine it better.

As in similar tactics games, like HeroClix and MageKnight, the game is usually played by two opponents. The game uses a watered-down ruleset from Dungeons & Dragons.

So whether you want to spice up your RPG with some colorful plastic figurines, or you want to play skirmishes using the D&D Minis rules, these miniatures will make a great part of your collection.